Isa 6:9-12 And He said, Go, and tell this people, You hear indeed, but do not understand; and seeing you see, but do not know. Make the heart of this people fat, and make their ears heavy, and shut their eyes; lest they see with their eyes, and hear with their ears, and understand with their hearts, and turn back, and be healed. Then I said, Lord, how long? And He answered, Until the cities are wasted without inhabitant, and the houses without man, and the land laid waste, a desolation, and until Jehovah has moved men far away, and the desolation in the midst of the land is great.
w
COMMENTS: 0
Published: Mar 17, 2017 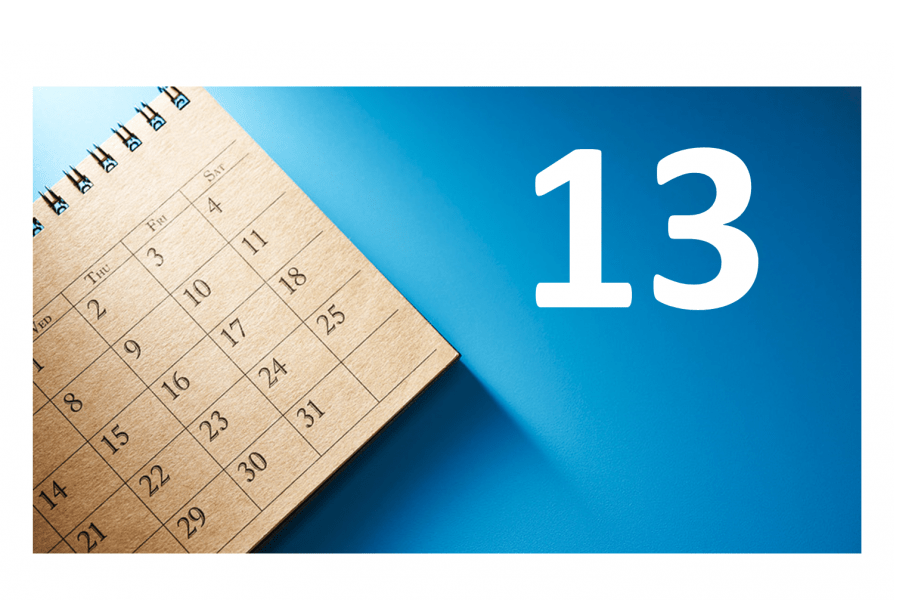 The Year of letting the land rest

Last year there was this huge controversy about the Barley being Aviv either at the beginning of the 1st month or whether it was to be aviv by the wave sheaf day.

I chose the later. It is my belief that the only reason we look for the barley to be Aviv is so that we can make the wave sheaf offering. Last year we had many report that the barley was indeed ripe on wave sheaf day last year.

Well….here it is, Sunday March 20 is what would have been wave sheaf day had we not added a 13th month this year to the shemitah year. The question is then, If this was to have been the wave sheaf day would the barley be aviv.

We have the following two reports for you to consider. I am now 100% confident that the adding of a 13th month this year was correct.

This brings us to an interesting scenario. What is going to happen should they not find barley that is aviv by the time they sight the moon on Thursday March 29, 2017?

I ask this question because of the current report on the state of the barley.

This report is courtesy of Becca Biderman in Israel Thursday March 16, 2017.

This will be a written report on the development of the barley to date. It ended up that I did not have anyone to accompany me to run the video while I checked the field.

First of all let’s review. Before the new moon 27th of February a team of three, me being one of the members; inspected the barley of all of the land of Israel’s growing regions from north to south and east to west. It was determined that the signs leading up to the barley being aviv were not sufficiently progressed to signal the appropriate timing. That the barley itself was only emerging or just emerged from the boot. So another lunar cycle would be necessary to allow the barley to develop into a stage that would yield a seed that is able to reproduce and at the same stage yield flour.

(Note what stage the barley is when you are told that it is in the boot. See the chart above. It is day 45 on the Zadok Scale.)

I chose today’s date to inspect the barley again to double check its present stage of development in light of the fact that IF Feb 27th would have been the first of the month of the aviv then in three days on March 19th it would have been the day of the Wave Sheaf or First Fruits.

Today I drove out to the field that was the most advanced during our inspections.

Along the road on the way to check the field, there were still Anemones in bloom, amemones precede aviv barley. When I pasted the fish farms there were Black storks, raptors, dove and swallows all in graceful displays of mid air mating dance/flights, but no Egyptian storks. Egyptian storks precede aviv barley. Some of the domestic wheat fields have been cut for silage (animal feed) Silage is always cut when the grain is immature in the head, these were the only area of any appearance of yellow or drying foliage. Everything else was still in bloom and extremely green being supported by our on going rains and mild temperature.

We had very heavy rain last night and the field was very wet. There the bare earthen orchard road runs beside the wild barley field there was wet and tacky mud (photo titled: mud)

When I got to the field I wasn’t disappointed at the height of the barley. I’m 5’5” and it was up to my arm pits (photo titled: barley height) 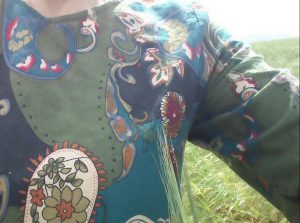 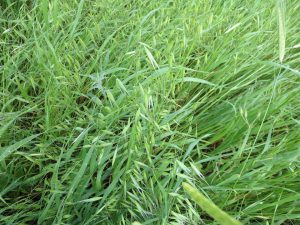 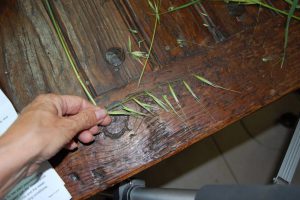 I found that the barley in the field was mixed, some barley had begun to bow their heads as the grains developed and added some weight to the head and some barley was still upright without any weight in the head. A field of aviv barley all have their heads bow to the earth, this has not happened in the field yet (photos titled: barley starting to bow) 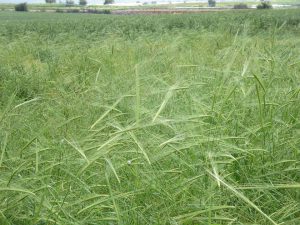 I was even able to find some small pockets of barley and oats still emerging from the boot, but this was an absolute exception rather than the rule. (photos titled: oats emerging, barley emerging) 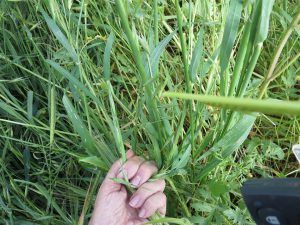 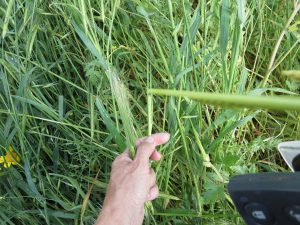 When I left the field my feet were soaked to the knees and in fact next week we are still expecting rains (photos titled: wet field, weather next week)

Finally, back at home I open the barley head so you can see an extremely wet and tender grain that is totally unacceptable as a seed that can bring forth fruit or as a seed that can yield flour. Please refer to your Zadoks scale and you will see what is present is a soft dough grain phrase (photos titled: wet or milk, unacceptable for aviv, 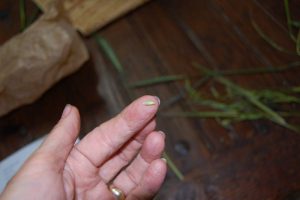 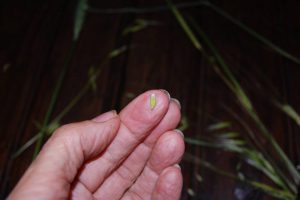 freely yields to a thumb nail, does not hold up to pressure) 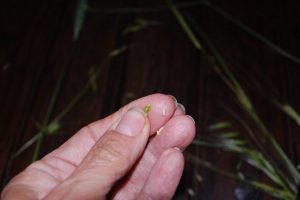 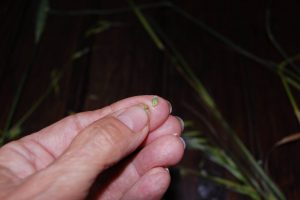 So in conclusion it was a correct decision to add another moon cycle to allow the barley to mature. If Sunday, the 19th of March had been declared Wave Sheaf or First Fruits there would be no barley mature enough on this date for flour or for reproduction.

If you look on the Zadok scale, you will be able to see the barley as reported by Becca in the dough stage or about 81-89 on the scale.

So my question is with the New Crescent moon just 11 days away, will our brethren be able to find barley that is ripe by new moon day? Remember they are saying the barley must be ripe by new moon or they will have to add a 13th month. And they are going to have to find some that is at that stage. Again this is going to be another interesting year. We do hope we all can Feast together this year for all the feasts at the same time.

The following is another report from Gilbert Ashendorf of Jerusalem on March 17, 2017 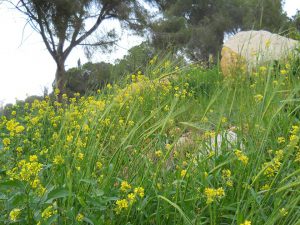 Gilbert is telling us that the barley around Jerusalem is in the head and flowering. This is about 51-69 on the Zadok scale. Again I ask the question. Will they find enough ripe barley by new moon day on March 29, 2017?

The reason I am asking this is this. Is Yehovah about to show us or demonstrate to us that the barley is need by wave sheaf day and not by new moon day? I have never heard of two years in a row with 13th months added to them. But then again I have only been doing this since 2005.

Wave sheaf day in April is April 16, 2017, a full 4 weeks away, or 28 days. Enough time for the barley to become aviv from the milk or dough stage as reported by Becca. But is it going to be aviv by New moon day in just 11 days time?
We are commanded to bring our first fruits of the barley and wave them before Yehovah. Those first fruits last year proved to be in March. We watch with  great excitement as we see the cloud of Yehovah moving. Brethren it is time to consider the method by which you determine the start of the year.

Why do you look for the barley? It is not commanded. The only reason we search for the barley is in order to make a wave offering. It is commanded with be stated. In order to make that wave offering you must have barley. It is not rocket science. And it is to be the first fruits. You begin the count to Shavuot when the sickle first hits the barley grains. And that is after the Sabbath as the wave sheaf day begins. So the barley must be aviv/ripe by that time and not by the time the crescent moon is sighted.

Keep your eye on Yehovah. He is going to show you.