Isa 6:9-12 And He said, Go, and tell this people, You hear indeed, but do not understand; and seeing you see, but do not know. Make the heart of this people fat, and make their ears heavy, and shut their eyes; lest they see with their eyes, and hear with their ears, and understand with their hearts, and turn back, and be healed. Then I said, Lord, how long? And He answered, Until the cities are wasted without inhabitant, and the houses without man, and the land laid waste, a desolation, and until Jehovah has moved men far away, and the desolation in the midst of the land is great.
w
COMMENTS: 0
Published: Jul 11, 2005

Total Borrowings of Depository Institutions (banks) from the Federal Reserve

In July of 2008 I sent out an emergency News Letter warning of things to come in the economic arena. I urged you all to view the 2nd part of the DVD about the Pestilence that is soon to come and how it arrives. I told you to take a serious look at the chart which I spent a great deal of time on. You can view this at Jubilee Cycle Charts

In that DVD which was made in March of 2008, the chart I showed you went as high as 47 Billion dollars borrowed by the banks from the Fed reserve. At that time this was a scary chart, as we compared it to the 1980’s savings and loan crisis and as we also compared it to the great depression of 1930’s.

That same chart today in July of 2008 is up to 170 Billion dollars borrowed by the bank from the fed reserve just to stay a float. I say in the DVD that there is smoke in the kitchen and we are in grave danger. Yet many of the politicians are saying that everything is OK, have not fears. We can borrow our way out of this.

If your bank goes belly up, your savings are insured by the Fed Reserve up to about $60,000, I think. As you will read below, there are hundreds of banks that are on the watch list of possibly going bankrupt. And IndyMAc was not one of those banks.

If each of these banks goes bankrupt and then many of the ones that we do not even know about, also go bankrupt how will the Fed Reserve be able to pay back to you those funds they have insured. They will not. Your life savings will be gone in a heart beat.

If you have it in a pillow at your home, it will be worthless, as the rest of the world dumps the dollar in favor of more secure money. The value of the dollar is not guaranteed by gold, and will be only good for burning.

Brethren it is time to get wised up and to do it yesterday, because today is almost too late. Get out of debt ASAP!

You can view an updated version of that chart at http://research.stlouisfed.org/fred2/series/BORROW?cid=122 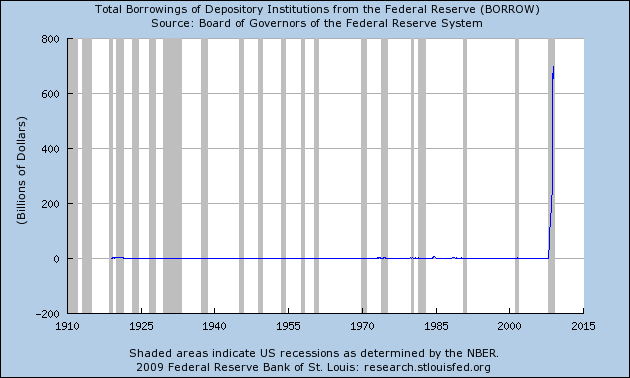 This article is being written two weeks after that notice was sent out.

When Fed Chairman Bernanke and Treasury Secretary Paulson go on TV begging Congress for a blank check to bail out Fannie Mae and Freddie Mac, you know the situation is dire.

Indeed, Fannie Mae and Freddie Mac’s debt obligations are a mind-boggling $4.6 trillion. Yet the capital they have to cover it is less than 2 cents on the dollar.

There’s just no way the government can print enough money to cover that shortfall without sending inflation to the moon and the dollar off the edge of the table against stronger foreign currencies like the Canadian dollar.

And now because of a series of massive financial bailouts, the dollar’s orderly decline is about to turn into a rout.

The Bear Stearns bailout was $29 billion. Then, Merrill Lynch was so desperate for cash, they asked the Federal Reserve to let them borrow money, with no pesky questions asked about collateral or ability to repay. The Fed said “yes.”

Century-old investment bank, Lehman Brothers, also has one foot on the banana peel. The FDIC has 146 other banks on its “about-to-go-bust” list. And Indy-Mac, which wasn’t even on it, just went bust; the third-largest financial failure in American history.

And now, with the government promising to bail out companies like Fannie Mae and Freddie Mac to the tune of $4.6 TRILLION — inflation is set to skyrocket. This puts the dollar on the brink of its sharpest decline yet.

I love readers’ comments at the end of online articles and blog entries. I recently came across one at the end of an article regarding general Federal Reserve policy that simply said:

“Ben Bernanke is like the death star. Destroyer of worlds.”

For those of you not up on movie trivia, the comment is referencing Star Wars. In the film, the bad guys build a manmade space station meant to destroy an entire planet in a single attack.

And while Bernanke’s official job description isn’t destroying planets, some might argue that he’s at least destroying the U.S. economy.

That opinion may have gained greater support this week after Bernanke’s two days of Congressional testimony.

Accompanied by Treasury Secretary Henry Paulson and SEC Chairman Christopher Cox, Big Ben paid lip service to the panel of Congressmen bombarding him with questions. While Bernanke gave the normal reassurances about the state of the economy and inflation, the subject of giving the Fed additional regulatory responsibilities made for a heated discussion.

The best quote came from Senator Jim Bunning. When it was his turn to address the Fed Chairman, he noted, “The Fed is the systemic risk.”

People Are Sick and Tired of the Fed’s Decision
To Fight Economic Fire with Molotov Cocktails!

Internal Sponsorship
Batten down the hatches; look out below …
The Great Inflationary Firestorm of 2008
Has Officially BEGUN!

Consumer prices: Surging! The OFFICIAL CPI inflation just jumped to a 17-year high in June, the second-worst increase since 1982 …

But it seems like lately the Federal Reserve is disregarding the historical boom-bust cycle, doing everything in (and beyond) its power to keep the good times rolling.

Sounds nice, but there comes a point when the economic system needs to cleanse itself. Hence the subsequent bust to every boom. Excesses need to be worked off; idle capital goods need to be redistributed or repurposed; the fat needs to be trimmed.

By making every effort to sustain the boom when it’s already naturally run its course only delays the inevitable; the impending bust will feel all the more painful. Think about fighting fire with Molotov Cocktails.

Many analysts, including myself, are beginning to believe the Fed needs to stop fighting the fire with bailouts and cheap money. Instead, they need to tighten up and let the market process work things out from here.

Right now, the Fed is no doubt in bailout mode. Just look at the obvious Bear Stearns backstop a couple months ago and now the Fannie/Freddie fiasco. And who knows how many other firms the Fed has saved â€” so far â€” by opening up the vault doors to nearly everyone.

Have a look at the following set of charts. This first one shows the total borrowings of depository institutions (banks) from the Federal Reserve from 1980 until 2006:

You can see a major spike to roughly eight billion dollars of borrowing in 1984, likely due to the economy’s recovery from recession in years prior.

This spike in total borrowings was also coupled with a brief surge of inflation (of similar proportions to what we’re experiencing today) after Fed Chairman Paul Volcker brought the inflation rate down from 13.5% in 1980 to as low as 3.2% in 1983.

Now, this next chart shows the exact same series of data, only this time I’ve included up through June of 2008 …

As you can see, the period up through June 2008 completely dwarfs the amount of borrowings in any period before it. In fact, it makes all other periods look like a flat line!

The spike to more than $170 billion dollars of borrowings reflects the newly created auction facilities.

What This Means for the U.S. Dollar …

Bernanke recently admitted that the U.S. dollar needed to work off some of the excesses from the rally that began in the mid 1990s. That’s part of why the bear market has extended so deep for the buck.

The dollar has done that â€” and more.

But the charts I just showed you prove that the dollar is not nearly out of the woods yet.

Basically, if the Fed doesn’t change its attitude and stop feeding debt creation, asset prices will spiral higher, and more pain will be crammed into the closet until someone or something knocks the door open.

Bottom line: The buck is ready to fight back â€” if and when the Fed realizes they need to HIKE interest rates just as they did in 1984 when they had another inflation scare after bringing rates down too soon.

And, oh yeah, I hear it every day â€” “It’s an election year and the Fed couldn’t possibly use interest rate hikes to teach some lessons.”

I say they could, and should. I say we stop giving politicians a free pass, and start making them earn our votes.

Proverbs 6:6 Go to the ant, you sluggard! Consider her ways and be wise, 7 Which, having no captain, Overseer or ruler, 8 Provides her supplies in the summer, And gathers her food in the harvest. 9 How long will you slumber, O sluggard? When will you rise from your sleep? 10 A little sleep, a little slumber, A little folding of the hands to sleep– 11 So shall your poverty come on you like a prowler, And your need like an armed man.

Get ready brethren for the biggest financial disaster in history to take place in our generation. You have no time to waste.

This chart is updated November 29/2008
Notice how high the amount has now grown too. Also notice how bad things have gotten since I first sent this article out.