Isa 6:9-12 And He said, Go, and tell this people, You hear indeed, but do not understand; and seeing you see, but do not know. Make the heart of this people fat, and make their ears heavy, and shut their eyes; lest they see with their eyes, and hear with their ears, and understand with their hearts, and turn back, and be healed. Then I said, Lord, how long? And He answered, Until the cities are wasted without inhabitant, and the houses without man, and the land laid waste, a desolation, and until Jehovah has moved men far away, and the desolation in the midst of the land is great.
w
COMMENTS: 0

To print content,  click on the Print PDF Button. If you wish to only print this weeks article, click on PDF ICON in Article Section, and it will open in separate window.

Nefertiti and Akhenaten: Now You know the rest of the story

Recently I have been blessed to have Yahweh reveal the Sabbatical and Jubilee Years throughout history. This can be read in the  Charts Archives or purchased at Online Store

Once this was understood I was able to learn that the exodus took place During Passover in 1379 B.C. It was only now in 2010 that I was doing some research on who the Pharaoh was at this time of the Exodus.

I found that Akhenaten (1379-1362 BC) became the Pharaoh in 1379 BC and found this to be a most fortunate coincidence. Akhenaten is sometimes credited with the invention of monotheism — that is, the belief in one god above all others. Why would this one Pharaoh become a follower of just one god when the whole history shows that the Egyptians have always followed many gods.

I found it a great coincidence that the year of the Exodus according to my Jubilee cycles matches the year that the New Pharaoh of Egypt begins his reign and is also known as being a Monotheist. I guess the Elohim of Moses had a great effect on the next Pharaoh after the army was destroyed in the spring of 1379 BC.

What I found most amazing about this connection was the following statement at
http://www.umm.edu/news/releases/akhenaten_deformities.htm

Akhenaten, a pharaoh during Egypt’s 18th Dynasty – best known for transforming Egypt’s religious system from worship of multiple gods to the worship of one god – may have had two medical abnormalities that could explain his portrayal in sculpture and carvings with an exaggerated female appearance and elongated head. Questions about Akhenaten abound. Were his artisans following his orders to employ an artistic style for some religious purpose? Or did he really look this bizarre, and if so, why? 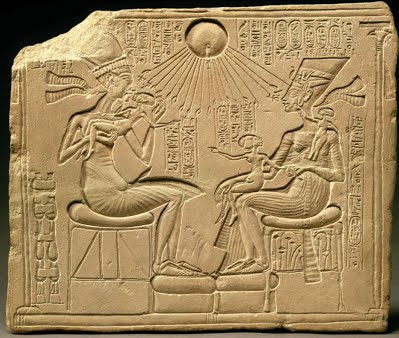 While the bodies of many pharaohs and members of their families have been preserved as mummies, no mummy of Akhenaten has been found. But statuary and carvings from the time show Akhenaten alone as well as in affectionate family settings that included his main consort, Nefertiti, and their children. Such settings were never employed in artwork of pharaohs before or after Akhenaten.

I cannot help but wonder if Nefertiti and Akhenaten are not the same person. That is she dressed as a Pharaoh when she had to appear before the people, so that the world would think that Egypt still had a ruler and would not be invaded by others once they found out she had no army. This is just my speculations of this. I have no way to know. But this Pharaoh is the only one to promote the family. That is something a woman would do. In the picture above of Akhenaten you can see the shape of a woman.

We read about Nefertiti From http://en.wikipedia.org/wiki/Nefertiti She was made famous by her bust, now in Berlin’s Neues Museum, shown below. The bust is one of the most copied works of ancient Egypt. It was attributed to the sculptor Thutmose, and it was found in his workshop. The bust itself is notable for exemplifying the understanding Ancient Egyptians had regarding realistic facial proportions. Some scholars believe that Nefertiti ruled briefly after her husband’s death and before the accession of Tutankhamun as Smenkhkare, although this identification is a matter of ongoing debate. 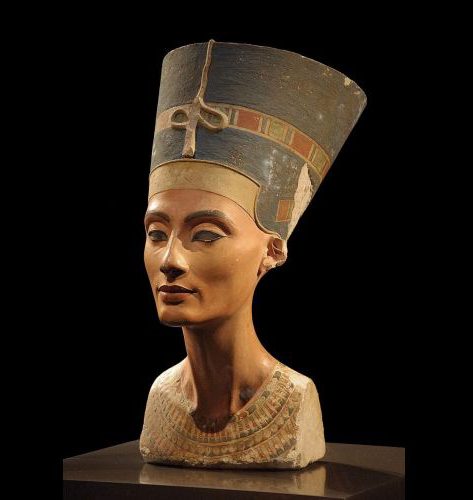 It is rather convenient if Nefertiti is in fact impersonating Akhenaten that he should die first so that she can have her life back to normal. But this is only speculating on who took over after the Pharaoh who went after Moses and died in the Red Sea.

? Nefertiti meant “the beautiful (or perfect) woman has come”
? The famous bust of Nefertiti has lead to her being described as ‘The Most Beautiful Woman in the World.’ Nefertiti was the Chief Wife of Akhenaten and the mother-in-law and stepmother of Tutankhamun, a beautiful woman forever captured in her portrait bust found at Tell el-Amarna.

Armana is the place where the Tribes of Israel worked as slaves. Nefertiti only had duaghters. King Tut was born from another wife of the then Pharaoh. His first born son. Nefertiti was trying to arange the marriage of one her daughters to Tut when he died.

King tut was found to have one of the richest Tombs of Gold ever found. Yet he was just a young man. All of this sounds a great deal like the story of the Exodus. With the tomb of Nefertiti’s husband not being found. Causes you to scratch your head……

http://en.wikipedia.org/wiki/Ipuwer_papyrus
The Ipuwer Papyrus is a single surviving papyrus holding an ancient Egyptian poem, called The Admonitions of Ipuwer[1] or The Dialogue of Ipuwer and the Lord of All.[2] Its official designation is Papyrus Leiden I 344 recto[3]. It is housed in the Dutch National Museum of Antiquities in Leiden, Netherlands, after being purchased from Giovanni Anastasi, the Swedish consul to Egypt, in 1828.

The sole surviving manuscript dates to the later 13th century BCE (no earlier than the 19th dynasty in the New Kingdom). Egyptologist Dr Halpern believed that the papyrus was a copy of an earlier Middle kingdom copy. The dating of the original composition of the poem is disputed, but several scholars, have suggested a date between the late 6th dynasty and the Second Intermediate Period (ca. 1850 BCE – 1600 BCE).[4] The theme of this work has previously been taken either as a lament inspired by the supposed chaos of the First Intermediate Period, or as historical fiction depicting the fall of the Old Kingdom several centuries earlier, or possibly a combination of these.

Ipuwer describes Egypt as afflicted by natural disasters and in a state of chaos, a topsy-turvy world where the poor have become rich, and the rich poor, and warfare, famine and death are everywhere. One symptom of this collapse of order is the lament that servants are leaving their servitude and acting rebelliously. Because of this, and such statements as “the River is blood”, some have interpreted the document as an Egyptian account of the Plagues of Egypt and the Exodus in the Old Testament of the Bible, and it is often cited as proof for the Biblical account by various religious organizations[5][6].

David Rohl recently proposed a revised chronology, dating the Exodus to the Second Intermediate Period, in which case Ipuwer might refer to that event. However, Rohl’s chronology has been rejected by Kenneth Kitchen.[7]. Moreover, the association of Ipuwer with the Exodus is generally rejected by Egyptologists.

In a recent post on David Rohl’s yahoo group David said the following which in light of all that is said here is just an additional bit of information to the type of man Pharaoh was. We are cutting into a discussion on the DNA of king Tut.

I’m no expert when it comes to DNA, but I did say that the parents of Tut were likely to be Amenhotep III and Sitamun (his daughter), NOT Amenhotep III and Queen Tiye. In which case Tut would get a 23 from A III and a 23 from A III’s daughter Sitamun = KV35 Younger Lady. Your argument, as far as I can see, depends on Tiye not having 23, but I do not claim her to be Tut’s mother. Sitamun gets her 23 from her father A III, she then becomes A III’s Great Royal Wife and gives birth to Tut who in turn inherits A III’s 23 from his father and Sitamun’s (KV35YL’s) 23 from his mother.

With the Pharaoh of Egypt now dead and not one survivor of the entire Army, the citizens of Armana and Karnak and indeed much of Egypt began to wonder what happened.

Pharaoh’s most beautiful Queen Nefertiti orders some of the older men to go and look for the army of her husband. What has happened to them? Surely they should have been able to wipe out a rag tag bunch of slaves.

After some time the men report back that they followed the tracks of the army and that they went into the Red Sea. There is not a trace of them after that.

Nefertiti waits another couple of days then again another and sends out scouts to look again for the army. Her Husbands son by another wife is still not buried. Tutankhamun lies in wait for his father to return. But the days turn into weeks and not a single word about the army.

Then traders from Midian come to Egypt telling a story about the Hebrew Slaves from Egypt crossing the Red Sea and how the entire Egyptian Army and Pharaoh were drowned in that very sea.

Nefertiti orders the traders to be killed and then to close the borders and let no one in or leave. She then consults with her advisors. If the rest of the world knows we have no Pharaoh and no army they will invade us and we will be carried away as slaves and concubines.

So she dresses up as Pharaoh and presents herself to the people as Akhenaton. The statutes of Pharaoh are strange, for they now look like a man but with the feminine qualities of a woman. It is hard to dress the most beautiful woman in Egypt in men’s clothing so that she looks like a man. You simply can’t hide beauty.

Nefertiti sends word to the Hitites to send a suitable Prince to marry into the line of Pharaoh. But the Hitites suspect a trap. Nefertiti carries on the charade for years pretending to be both Pharaoh and queen. But Egypt will not recover from such calamities as was brought on by the God of the Israelites for a very long time.

As to who was the Pharaoh of Egypt that died in the Red Sea, the debate continues. But now you have some more interesting information to share when you sit around the table on Passover and eat your lamb.

But some of you may not know what happened to the Egyptian army. If you want to learn more about this event which Nefertiti never completely understood, go to Exodus, Another Study of the Facts to read how it all happened. Just as this article may have surprised you the next one will also give you a great deal to think about.

Have an inspiring Passover.