Isa 6:9-12 And He said, Go, and tell this people, You hear indeed, but do not understand; and seeing you see, but do not know. Make the heart of this people fat, and make their ears heavy, and shut their eyes; lest they see with their eyes, and hear with their ears, and understand with their hearts, and turn back, and be healed. Then I said, Lord, how long? And He answered, Until the cities are wasted without inhabitant, and the houses without man, and the land laid waste, a desolation, and until Jehovah has moved men far away, and the desolation in the midst of the land is great.
w
COMMENTS: 0
Published: Aug 13, 2015

The New Moon will be visible this Sunday night, barring any clouds where you are. As always, I encourage you to go out and see who can see it first and guess the time you will see it.

Each month you do this you prove the Hebrewism Yehshua spoke, that no man can know the day or the hour, speaking of His coming.

And the reason is that the day of His coming is explained when you understand the Holy Days and especially the Holy Day of Trumpets or Yom Teruah, the Feast of Shouting.

When Christians quote this verse to you to discredit the prophecies you are sharing with them, they show their ignorance of Yehovah’s Holy Days. They just do not get it.

The name of the month (spelled Alef-Lamed-Vav-Lamed) is said to be an acronym of “Ani l’dodi v’dodi li,” “I am my Beloved’s and my Beloved is mine,” a quote from Song of Songs 6:3, where the Beloved is G-d and the “I” is the Jewish people. In Aramaic (the vernacular of the Jewish people at the time that the month names were adopted), the word “Elul” means “search,” which is appropriate, because this is a time of year when we search our hearts.

According to tradition, the month of Elul is the time that Moses spent on Mount Sinai preparing the second set of tablets after the incident of the golden calf (Ex. 32; 34:27-28). He ascended on Rosh Chodesh Elul and descended on the 10th of Tishri, at the end of Yom Kippur, when repentance was complete. Other sources say that Elul is the beginning of a period of 40 days that Moses prayed for G-d to forgive the people after the Golden Calf incident, after which the commandment to prepare the second set of tablets was given.

As the month of Elul draws to a close, the mood of repentance becomes more urgent. Prayers for forgiveness called selichot (properly pronounced “s’lee-KHOHT,” but often pronounced “SLI-khus”) are added to the daily cycle of religious services. Selichot are recited in the early morning, before normal daily shacharit service. They add about 45 minutes to the regular daily service.

Selichot are recited from the Sunday before Rosh Hashanah until Yom Kippur. If Rosh Hashanah begins on a Monday or Tuesday, selichot begins on the Sunday of the week before Rosh Hashanah, to make sure that there are at least 3 days of Selichot. The first selichot service of the holiday season is usually a large community service, held around midnight on Motzaei Shabbat (the night after the sabbath ends; that is, after nightfall on Saturday). The entire community, including men, women and older children, attend the service and the rabbi gives a sermon. The remaining selichot services are normally only attended by those who ordinarily attend daily shacharit services in synagogue.

A fundamental part of the selichot service is the repeated recitation of the “Thirteen Attributes,” a list of G-d’s thirteen attributes of mercy that were revealed to Moses after the sin of the golden calf (Ex 34:6-7): Ha-shem [1], Ha-shem [2], G-d [3], merciful [4], and gracious [5], long-suffering [6], abundant in goodness [7] and truth [8], keeping mercy unto the thousandth generation [9], forgiving iniquity [10] and transgression [11] and sin [12], who cleanses [13]. Why is “Ha-shem” listed twice as an attribute? And why are three of these “attributes” Names of G-d? Different names of G-d connote different characteristics of G-d. The four-letter Name of G-d (rendered here as “Ha-shem”) is the Name used when G-d is exhibiting characteristics of mercy, and the Talmud explains that this dual usage indicates that G-d is merciful before a person sins, but is also merciful after a person sins. The third attribute is a different Name of G-d that is used when G-d acts in His capacity as the almighty ruler of nature and the universe.

In one month’s time will be the Feast of Trumpets.  We want to begin explaining the holy days to you and especially to those who are new. So get ready to be amazed at the things your church never taught you about the plan of Yehovah.

Once again, we are going to go over the facts that prove Yehshua was born on the Feast of Trumpets and not on Sukkot, as some erroneously presume with no facts and only assumptions. Facts speak volumes to those who actually look at them.

We are going to review what we wrote on this subject last year. Just click on the title below. But before you go, read the rest of this news letter.

For a while now, we have been telling you in our newsletters about the preparations taking place in the Philippines. They are nothing short of Miraculous. This week we had Bro Aike on our Hebrew Nations radio show.

We wanted you to hear from his own mouth about the things taking place and the meetings he is setting up in order for me to present the Sabbatical and Jubilee curses to brethren, Church leaders, Government officials and even Military Generals, who will be coming to hear me speak in a number of cities.

So if you will, you can listen to the show at this link.

On September 5 & 6 we will be speaking in Myerstown, PA about the coming curses and how they can be broken by obedience. You must register for this event with Margaret Umble by calling 717-507-5149 for details. You need to register by August 22.

Joining us in Myerstown are Mitch and Krista Houston from our Radio show as well as Greg Cronkite, our producer. We are hoping our web producer, James Relf, will also be there so you can meet our whole team.

We look forward to seeing you there. 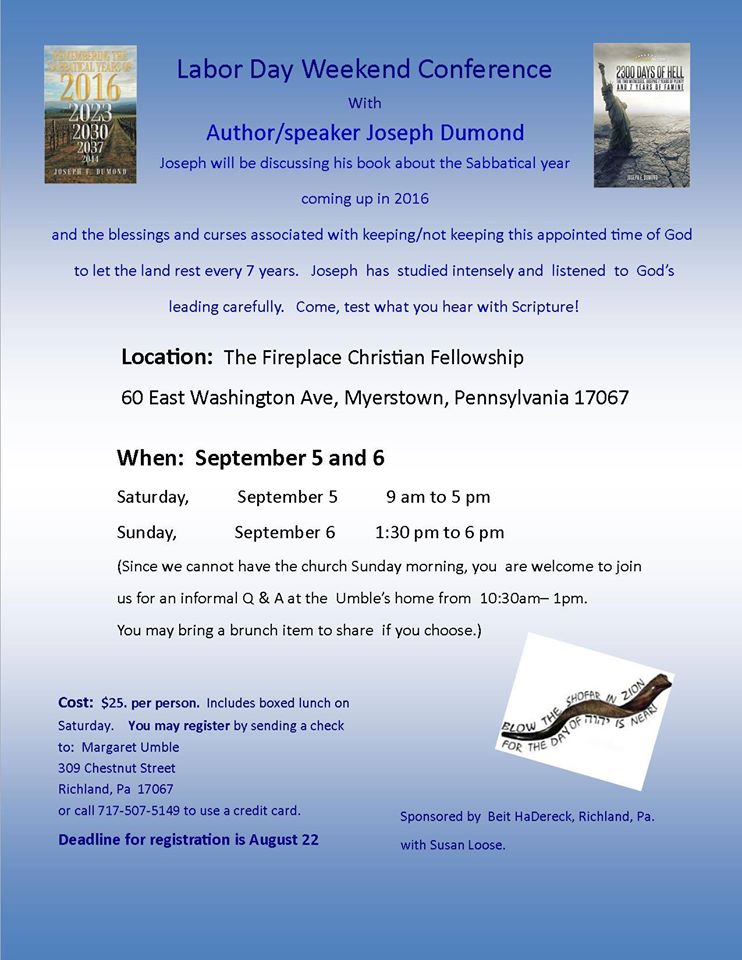