Do You Have Enough Oil 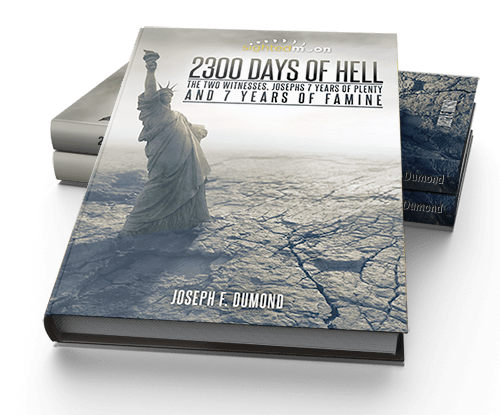 This page is to show you just how little time we have left.

We base all of our understanding on the Sabbath, the Holy Days of Lev 23 and them alone, and the Sabbatical and Jubilee years of Lev 25. Once we understand these signs then and only then can we begin to understand end-time prophecies. The Daniel 9:24-27 Prophecy is based on an in-depth understanding of the Jubilee Cycles and cannot be understood unless you know the Jubilee years. We explain the 70 Weeks of Daniel and show you how Daniel was talking about these Jubilee Cycles in exhaustive detail in our book The 2300 Days of Hell.

Once you understand this it will be very sobering to all those around you. It is quite shocking to understand. And time is running out.

We have proven when the Sabbatical and Jubilee years are and show you how you too can do the same thing in our book Remembering the Sabbatical Year of 2016. We strongly encourage everyone to get their own copy and study it and then to tell others.

You can order it from Amazon or Barnes & Noble as well.

You Need both of these books. 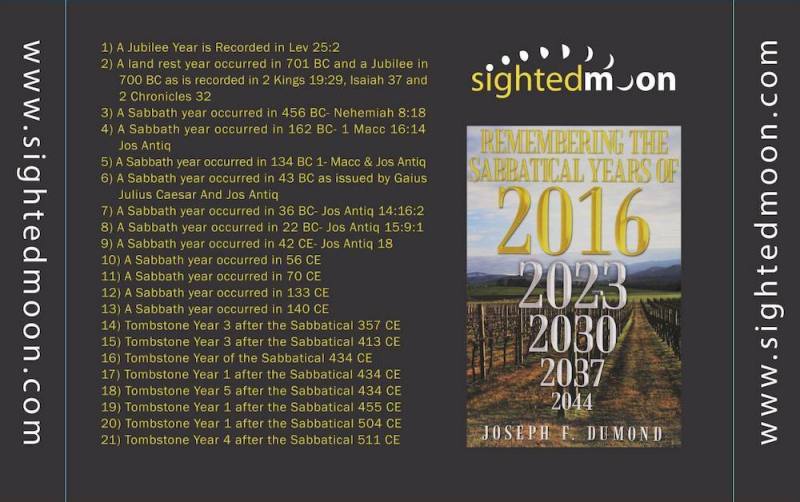 Remembering the Sabbatical Year of 2016 was written based upon the 12 known Sabbatical years and the two Jubilee years that we knew then. Since then we have discovered many more which we share in our article about the 45 Sabbatical and Jubilee Year Proofs. We then also discovered many ancient tombstones that also supported our findings and have written about them in our article 30 Tomb Stones of Zoar. Even the Great Rambam writes and admits that our findings are correct but that the Jews use a traditional Shemitah cycle which comes a year and a half before. Exactly as they do today.

Once you know the Sabbatical and Jubilee cycles and when they are and you understand the Holy Days of Lev 23 then prophecy begins to reveal itself to you. In our book The 2300 Days of Hell, we walk you through the terrifying prophecy of Daniel 9:24-27 and how it is speaking to us today. I cannot tell you enough how little time is left and how much danger the world, you and your family are in. But I do explain all of this in our book The 2300 Days of Hell. You need to get it and read it. Order it right now while you are reading this.

Who are The False Prophets?

Many Christians will say we are false prophets. They say this because of their understanding of what Yehshua said in Matthew.

Mat 24:36 “But concerning that day and hour no one knows, not even the angels of heaven, nor the Son, but the Father only.

It is because they do not keep the Commandments of Lev 23 that they do not understand what this Hebrewism is that Yehshua was expressing. One of the Feast Days of Lev 23 is known as the Feast that comes at a day and an hour no one knows. It is on this day that Yehshua was born and came for the first time. And it is at this very same time that He will come again in the future. We explain all of this in a very simple read in our book It Was A Riddle Not A Command which you can get at our site sightedmoon.com or at Amazon.

You can only understand the Holy Days of Lev 23 by keeping them and doing them. The false teachers will not be keeping these Holy Days and they will call all those who do false prophets and heretics. As Isaiah said calling evil good and good evil.

Time is Running Out

In Matthew 25 Yehshua talks about the Ten Virgins.

“Then the kingdom of heaven will be like ten virgins who took their lamps and went to meet the bridegroom. Five of them were foolish, and five were wise. For when the foolish took their lamps, they took no oil with them, but the wise took flasks of oil with their lamps. As the bridegroom was delayed, they all became drowsy and slept. But at midnight there was a cry, ‘Here is the bridegroom! Come out to meet him.’ Then all those virgins rose and trimmed their lamps. And the foolish said to the wise, ‘Give us some of your oil, for our lamps are going out.’ But the wise answered, saying, ‘Since there will not be enough for us and for you, go rather to the dealers and buy for yourselves.’ And while they were going to buy, the bridegroom came, and those who were ready went in with him to the marriage feast, and the door was shut. Afterward the other virgins came also, saying, Lord, lord, open to us.’ But he answered, ‘Truly, I say to you, I do not know you.’ Watch therefore, for you know neither the day nor the hour.

1 Sam 16:12 And he sent and brought him in. Now he was ruddy and had beautiful eyes and was handsome. And the Lord said, “Arise, anoint him, for this is he.” Then Samuel took the horn of oil and anointed him in the midst of his brothers. And the Spirit of the Lord rushed upon David from that day forward. And Samuel rose up and went to Ramah.

Psalm 89:20 I have found David, my servant;
with my holy oil I have anointed him,

Even though those 5 virgins thought they had enough oil which they did not, Yehshua says to them that He does not know them and they are not allowed in. So how do you get this Holy Spirit?

Acts 5:32 And we are witnesses to these things, and so is the Holy Spirit, whom God has given to those who obey him.”

You must be obeying the commandments and keeping them in order to receive that Holy Spirit, that oil that you need to get into the wedding as one of the 5 Wise Virgins. You must obey and keep the Sabbath and the Holy Days and the Sabbatical years.

Notice what Isaiah was saying to which Yehshua quoted when He began His ministry about the acceptable year. He was anointed with the Holy Spirit and has the oil of Gladness in Him.

Isaiah 61:1 The Spirit of the Lord God is upon me,
because the Lord has anointed me
to bring good news to the poor;
he has sent me to bind up the brokenhearted,
to proclaim liberty to the captives,
and the opening of the prison to those who are bound;
to proclaim the year of the Lord’s favor,
and the day of vengeance of our God;
to comfort all who mourn;
to grant to those who mourn in Zion—
to give them a beautiful headdress instead of ashes,
the oil of gladness instead of mourning,
the garment of praise instead of a faint spirit;
that they may be called oaks of righteousness,
the planting of the Lord, that he may be glorified.

The only way you can get this oil and have extra of it in you is for you to begin to obey. You need time to begin to keep the Sabbath and the Holy Days and the Sabbatical years. Time, the one thing that is fast running away from you.

We strongly urge you to order these books today and read them and study them with your spouse and family and Church group.

Once you understand the Jubilee Cycles and how they reveal end-time prophecy then you will begin to understand just how little time is left as we are showing you in the following countdown clocks.

This clock has now run out. We leave it here as testimony to the fact that we were correct in the timing and the start of these 2300 Days.

On May 25, George Floyd was murdered and by the weekend of May 30-31st, there were riots in over 200 cities across the USA and around the world. These riots and looting and killings have continued up until this time we are updating this page on November 9, 2020. There have been militia groups forming on both sides of this divided nation armed and walking down the streets. This does not cont the deep divisions in the USA due to the election in 2020. Those divisions continued up to January 6, 2021, when the electoral college voted.

On March 10, 2020, the WHO declared a worldwide Pandemic now known as COVID 19. As we update this page on January 3, 2021, the USA has the most case per day at 351,000 deaths and climbing. They also have the most case and the most death from around the world. Many have lost their jobs and others deferred the payment of mortgages and rent. The economy is in a very dangerous place.

In April and may we saw a Biblical-sized locust across East Africa, Saudi Arabia, Pakistan, India and China.

Wildfires across the USA were record-breaking and there were so many that the sun was turned to darkness in the middle of the day. It also caused the moon to turn blood red on many nights.

This year of 2020 also saw a record number of Hurricanes striking the USA week after week.

As we update this post on January 3, 2021, anxiety is high amongst the people. The US President Trump has not conceded the election and Joe Biden along with the News Outlets has claimed victory. Recounts and court cases followed and were dismissed. Chaos is the norm.

And during all of this Twitter, Facebook, Youtube, and Google have been blatantly censoring many people with a conservative viewpoint. And out and out blocking the President from tweeting his views. This is absolutely incredible. Even the NY Post was blocked from reporting on the corruption of Joe Biden and China and Ukraine.

Lev 26, warns us that the sword and plague and famine would come during this time. We are now seeing two of the three curses now here. And still the people do not repent.

The 2nd Count Down Clock is set for Shabbat Shuva September 18, 2026
This is when the Two Witnesses begin to do their work for 3 1/2 years. During this time there is no rain.

The two witnesses provoke the world to release the captives of Israel who return to the land of Israel leading up to Passover 2030. Passover begins at Sunset 5:49 PM March 19, 2030. There will be two Passovers this year 30 days apart. The second one starts April 17, 2030, at sunset. Those keeping the first one will flee into the wilderness of Moab. The rest keeping the second Passover will be slaughtered. The two witnesses are killed at Passover this year. This is also the start of the 3 1/2 years of the Great Tribulation.

The Great Tribulation ends on Atonement 2033 but the rapture of the 144,000 takes place at Shavuot as it says in Revelation 7 that they come out of the Great Tribulation. King David is raised up at this time. These are the First Fruits. June 4, 2033, is the start of Shavuot at Sunset 7:41 PM

The 120th Jubilee Year- The Start of the 7th Millennium

The Jubilee Year begins at Aviv 2045. That is March 19 at 5:50 PM. This is the 120th Jubilee years since the creation of Adam. It is the start of the 7th Millennium of Rest the same as the 7th Day of the Week is the Sabbath.

The 120th Jubilee Year- The Start of the 7th Millennium