It Was a Riddle Not a Command

Matthew 13:34 Jesus spoke all these things to the crowds in parables, and He did not speak to them without a parable, so that it might be fulfilled which was spoken by the prophet, saying, “I will open my mouth in parables; I will utter things which have been kept secret from the foundation of the world.”

He did this on purpose so they would not understand.

Matthew 13:10-17 And the disciples said to Him, Why do You speak to them in parables?

He answered and said to them, Because it is given to you to know the mysteries of the kingdom of Heaven, but it is not given to them.

For whoever has, to him shall be given, and he shall have more abundance. But whoever does not have, from him shall be taken away even that which he has.

Therefore I speak to them in parables, because seeing they see not, and hearing they hear not; nor do they understand. And in them is fulfilled the prophecy of Isaiah which said, “By hearing you shall hear and shall not understand; and seeing you shall see and shall not perceive; for this people’s heart has become gross, and their ears are dull of hearing, and they have closed their eyes, lest at any time they should see with their eyes and hear with their ears and should understand with their heart, and should be converted, and I should heal them.” 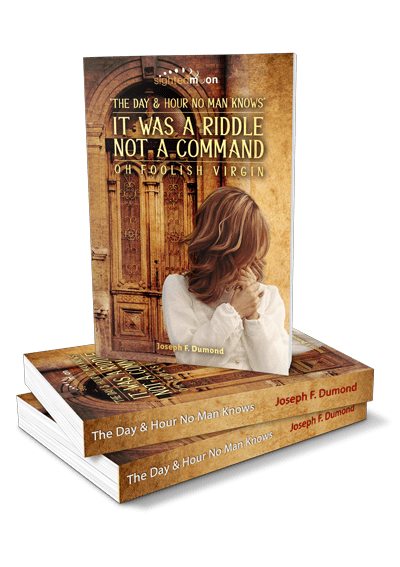 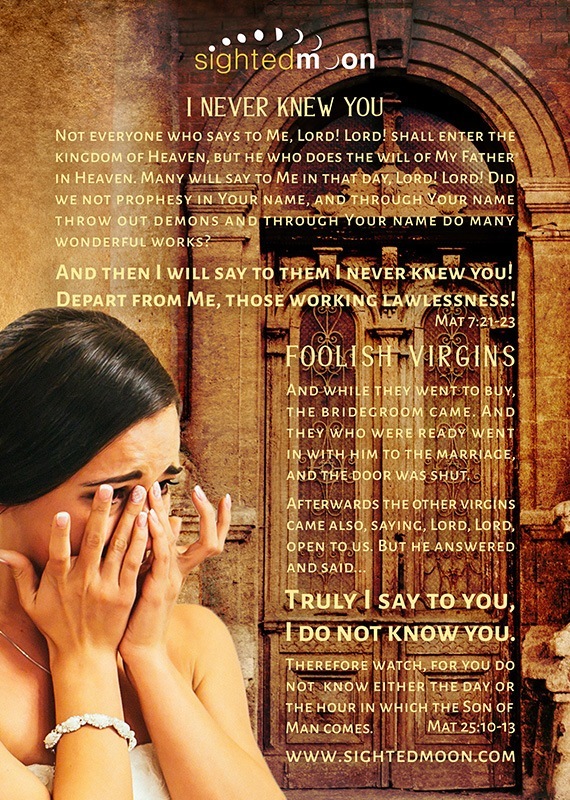 But blessed are your eyes, for they see; and your ears, for they hear. For truly I say to you that many prophets and righteous men have desired to see those things which you see, and have not seen them; and to hear what you hear, and have not heard them.

Yehshua spoke about the 5 Foolish Virgins in a parable.

Matthew 25:11-13 Afterwards the other virgins came also, saying, Lord, Lord, open to us.

But he answered and said, Truly I say to you, I do not know you.

Therefore watch, for you do not know either the day or the hour in which the Son of Man comes.

The expression “No Man Knows the Day or the Hour” is what Yehshua was speaking about in the previous chapter, Matthew 24:36 and here He is using it in this parable again.

This is what most Christians use to dismiss any and all end time prophecies as being false teachings. They do not realize it was a parable meant to say something and hide the truth from those whose hearts have grown stupid which is what that word ‘gross’ means.

Yehshua was telling the foolish they would not and could not know the day or the hour and at the same time telling the wise the precise time He would return on.

The question is which one are you?

Order the book and find out which one you are and learn how to change from being a foolish virgin to one of the 5 Wise Virgins.

Order the book so you never have to hear the words, I never knew you.

Below you can read the comments of many who do not know what this expression means. By their own words, you know which of the virgins they belong to.

What You Will Learn in This Book

Joe mentioned his new book coming out called “No Man Knows the Day or the Hour”. I am humbled to be asked by him to review it. This is my response to your readers. This is truly the MOST AMAZING BOOK that I have read from a Torah perspective. There is SO MUCH explained in this book. Yes, much of it comes from prior newsletters, but seeing it all presented in a most wonderful flow makes it an awesome, truly educational read. For anyone new to Torah, this book MUST be bought. For anyone very knowledgeable of everything, it still MUST be bought for ease of sharing the truth with others. For anyone trying to reach loved ones, this book MUST be bought….multiple copies of it. Joe, you have outdone yourself… again. I truly did not expect the book to be as all-encompassing as it is. So EVERYONE….WRITE THIS DOWN. Write down the name of this book. Do NOT forget about it. It will take time for the editor to do her job and for it to get published, so that means you have time to save your money so you can be prepared to purchase multiple copies when it comes available. This book will be so helpful for all the Pastors leading congregations in the Philippines, Burundi, and India too. A great reference book for everyone. I can hardly wait to get my hands on both hard copy and e-book forms so I can start sharing it.

If there could be a book written that puts all the information of God’s plan into one easy-to-read short book… it would be this one. The Bible has always been my favourite book, but at times it can seem very confusing. What I’ve found during my years of study is that the confusion comes when we add Christian doctrine… that is… ideas, traditions and theories brought into the church that muddy the true story of God’s plan for mankind and salvation through Messiah Yehshua. Christians have the New Testament story, while the Jews have the Old Testament story. But what’s the full story?
In his latest book, Joseph Dumond has done this very thing. He has extracted the story of salvation while demystifying the Feasts of the Lord AND in the process he has decoded the greatest riddle of all time. You may be thinking that’s a very bold boast, yet time and time again the Biblical research done by Joseph Dumond defies all those who try to prove it wrong. In this book, the biggest mystery of the Bible is unveiled, revealing the solution to this one particular riddle that has eluded the church for centuries. ‘No man knows the day or hour’. Most are too scared to look at this riddle. But the answer is there for those who want it.

Since first becoming a believer I was, like most others, told all of the false information that this one of a kind book refutes. Folks, the party is over. We are living on borrowed time as is! There is simply no more time to not be 100% CERTAIN that what we believe is taught in Scripture and TRUTH! I, WE, challenge you, just as the Author has stated time and time again, to PROVE ALL THINGS! If you cannot PROVE the things you believe, then please prepare to hear these horrific words IF you are proven wrong: “DEPART FROM ME, I NEVER KNEW YOU!” Well done, Joseph. 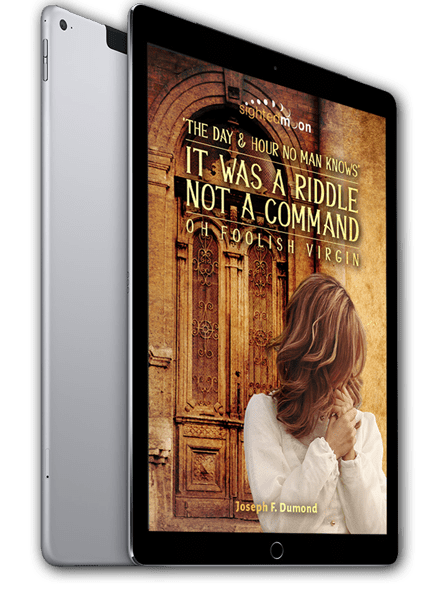 Read it on your favorite device!

If everyone assumes they are one of the Five Wise Virgins then who are the Foolish ones?

What did Yehshua mean when He said I never knew you? You pray every day. You go to church all the time, You did this and you did that, and yet He does not know you. Why?

Is He really talking about the Atheist and those who are not Christians? No, all 10 brides thought they were ready to marry Him, but the truth is only 5 were.

This book is an extremely sober wakeup call to the many who have felt they were going to be the ones. You still have time to correct what needs to be fixed.

Or you can wait to hear those most dreaded of words, I Never Knew You.

A word from the Author
Shalom,

I did not want to write a 5th book. I was convinced of the need to write this one by the many people who would write us and say No Man Knows the Day or the Hour, and therefore you cannot know these end-time prophecies you are teaching in your other books.

It was always disappointing to see this response as it showed us they would not and could not learn any more than what they had already come to understand at their local church or assembly. They had stopped growing. They had never learned what that expression they so often use actually meant and as such are in great danger of being told by Yehshua that He does not know them.

In order to prove to you what this Hebrew idiom actually does mean we must look at a few other subjects which will again deepen your understanding of the time when our Messiah was killed and of what is meant by Revelation 12. You will also learn that Yehshua always spoke in parables in public to purposely not reveal the information He was teaching about to the public. He wanted them to remain ignorant because they would not take the time to learn about Him in more detail.

I hope you are not like that. I hope you will be just like the wise virgins who bought extra oil so that they had it when they needed it.

Get the book, learn the truth and break the curse for not obeying. 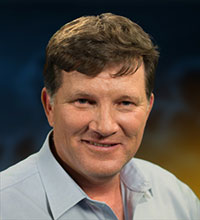